Clogged drains are the kind of problem that can sneak up on you slowly, and what starts out as a minor inconvenience can morph into a major problem that requires serious attention from an expert plumber.

Drain blockages rarely happen suddenly; it is far more common for debris to build up slowly over time. The first sign of a drain blockage may be that it takes just a little bit longer for the water to clear from the sink, or you notice a faint odour rising from it. Over time, you adapt to the fact that your drain doesn’t empty out immediately, and as the problem slowly gets worse, you don’t really notice it, because it only gets worse little by little.

This is one of the main dangers of drain blockages: a problem that could have been fixed relatively easily gets out of hand over time, until drastic solutions are called for.

If this issue sounds familiar to you, or if you’ve been having trouble clearing your own drains out recently, here are a few reasons why letting a clogged drain can not only be inconvenient but actually damaging to your home. 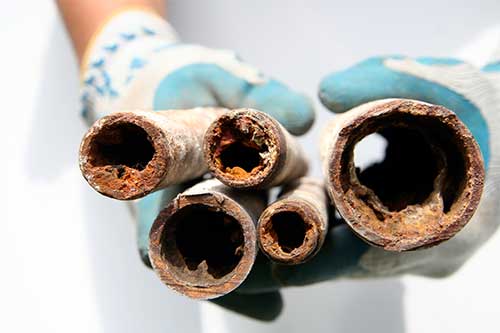 1. Hardened Build-Up Can be Expensive to Remove

The old adage that “a stitch in time saves nine” definitely applies to clogged drainage systems. Relatively minor blockages build up over time, and as they do, they harden and solidify in the drainage system, become much harder to dislodge.

The citizens of London, England, got a rather gruesome first-hand lesson in the science behind this when it was revealed that a vast build-up of cooking fat, human waste, and sanitary products had created a vast “fatberg” in the sewers of Whitechapel. Hard as concrete and the size of eleven city buses, the fatberg took a huge effort on the part of emergency workers to clean up.

While you probably won’t have to deal with a problem of that magnitude in your own drainage system, similar build-up can occur, especially if you aren’t careful about how you dispose of cooking grease.

In such cases, the more time passes before the blockage is dealt with head-on, the more difficult it will be to fix. An issue that might have been dealt with using a snake and some elbow grease were it caught early on can require you to hire a local plumber to rooter or water jet it out if the problem is left too long.

If the stubborn, hardened build-up is causing problems in your drainage system, give us a call at Morrison Plumbing & Mechanical if you want to hire a plumber with the equipment and know-how to fix all kinds of drain blockages.

2. Clogged Drains can Lead to Leaks

Your home’s drainage system has been designed with the goal of channelling wastewater away as efficiently as possible. In addition to being inconvenient, clogged drains inhibit that process in ways that can be structurally damaging to your home.

When build-up and blockages become some severe that water can’t actually drain away into the city or municipality’s main sewage infrastructure, it sits in the pipes. This sitting water puts pressure on the entire drainage system and can lead to fairly serious leaks.

The good news is that if a clogged drain has caused a leak in your home, you can call us anytime for a free Toronto plumbing estimate that will help you ascertain the extent of the damage and explore potential solutions. We have extensive experience providing homeowners in the Greater Toronto Area with emergency repairs, as well as a range of plumbing and mechanical services to help make homes more efficient, economical, and flood-resistant.

Just as sitting water can lead to serious leaks, it can also be a breeding ground for bacteria. This is perhaps unsurprising, given that wastewater is often carrying large amounts of organic matter.

With nowhere to go, your pipes can become a petri dish for all manner of unpleasant and even dangerous organisms — the nasty smell you notice arising from your sink is often an indication that something potentially hazardous is brewing below.

Experts have noted that there is a particular risk present when wastewater carrying human or animal waste is trapped and becomes foetid. A whole range of disease-carrying agents can flourish in these conditions, and can pose a serious health threat to you and your family if they are not dealt with in an appropriate manner.

For this reason, if you have a drain blockage that is causing suspicious odours and backing up your pipes, it’s a good idea to get professional help. An experienced plumber will not only be best positioned to help remove the blockage and return your drain to normal functionality, but they will also know how to approach the job safely.

If you are looking for a drain contractor in Toronto who can help you clean out your drains and sewer lines in an effective and hygienic way, Morrison Plumbing & Mechanical has your back. Whether a simple snaking or rooting procedure is sufficient, or a more invasive water jetter process is necessary, we can help you make sure that your drains are put back in order quickly and efficiently.

Homeowners tend to struggle to deal with problems that get slowly worse over time. When a window breaks, it’s pretty obvious that it needs to be replaced as soon as possible. But by the time a clogged drain becomes really inconvenient, it may already be too late to manage a DIY fix.

Due to the myriad problems that come from clogged drains that have been sitting for a while, if you have a clogged drain in your home, make sure you tackle the problem head-on today by getting in touch with us at Morrison Plumbing & Mechanical. We offer service twenty-four hours a day and seven days a week, so whether you’re dealing with a sudden leak or a steadily worsening blockage, help is just a phone call away.

Get a Free Estimate

Get a Free Estimate